You certainly know that 90% of the lead recovered from recycled car batteries is nowadays used to produce new ones. But did you know that this lead can be recycled for a completely different purpose, such as building new solar panels?

Engineers at the Massachusetts Institute of Technology have developed a procedure for making a type of solar cell using lead recovered from discarded car batteries. They came up with a technology, which allows them to extract lead from old batteries and use it to make perovskite material. 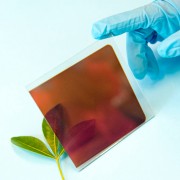 The team states that perovskite solar cells made from recycled lead perform just as well as    the ones made of high-purity brand new lead. This can lessen the impact of their  production on the environment. According to the team behind the discovery, perovskite  solar cells made with recycled lead work “just as well as those made with high-purity,  commercially available starting materials,” which means that recycling the lead from car  batteries could help support the production of these next-generation cells, and could be an  important bridge for perovskites until lead can be replaced by a less toxic but just as    efficient material.

This technology may also prove to be an important element of dealing with obsolete car batteries in the near future, when lead-acid batteries will be eventually replaced by newer and more efficient versions, and existing lead batteries will need to be dealt with safely, economically, and in an environmentally sound manner. It also suggests that the process could have significant potential economic benefits, and could be a key element in scaling up production of perovskite solar cells.

The researchers calculate that a single lead-acid car battery could supply enough lead for the fabrication of more than 700 square meters of perovskite solar cells. If the cells achieve 15% efficiency (a conservative assumption today), those solar cells would together provide enough electricity to power about 30 households in a sunny area, assuming that the perovskite thin film is just half a micrometer thick.

It is estimated that these panels are easy to produce on a large scale at low cost, due to the simple production process.

Therefore, the recycling of the used car batteries, process in which Recor Batteries participates actively, contributes significantly to the reduction of the environment pollution and the waste of energy and resources while it provides at the same time benefits for the customers by giving them a solution to the safe disposal of used batteries.